The following information was updated by the pilot.

“Concerning the report published on the Sumner fire site on 9/10, there are a few details I would like to correct and it would be a good idea if the report written could stick pretty strictly to the details reported, and not make any assumptions on what occurred on site. Most pilots willing to contribute their experiences to the site, are more than willing to clarify any details that could add to the educational value.

The flight height was 500ft at the time due to speed being of value to get mapping out on fire personnel mobile devices ASAP, and quality of images being a lower priority than we normally are accustomed to. Also, flight height is not capped at 400ft, but 400ft from structures on the ground of which we had both power towers and trees over this site. We commonly have to fly above 400ft for clearance of tall structures or trees in this region, and to provide enough separation from the highest mapping subjects (tree tops) for reliable orthophoto image rendering and structure from motion processing.

The suggestion of descending directly downward, was considered briefly, but the position was above the helo, and estimated to still be too close to the possible path of the helo, factoring a relatively lengthy controlled descent, getting laterally away from that aircraft was prioritized.

I did have an aircraft radio powered up on site, but really did not have the time to communicate the details reliably before a collision was possible. I do have 10 years of experience leading aircraft related rescue and ELT recovery work for the FAA, and know the realities of ground to air communications, especially when spontaneous.

The photo I sent of the mud-separator tank does show a landing pad nearby, but that was the takeoff position for the short flight did to search for the downed drone, using another mavic 2 I had as a backup. We simply could not safely gain access to the highest portion of the structure, and the drone was a perfect solution for that, and the workers on site had me take a few pics they wanted of the structure while up there. The landing zone for the mapping flights was about 200ft away from these structures on an small hill. Flying mapping from tankside would have been a red flag for sure, unless there were not other safe options.

About the TFR, I am not sure what part of my report made this unclear, but I was operating drone mapping missions directly for Incident Command on the fire site, and was the primary pilot in the airspace for the duration of the that incident. The TFR was in place so that I could perform my flights without conflict. I was in communication with IC throughout the operation, and coordinated a manned aircraft incursion midday for brief thermal image capture. The helicopter that approached my mapping operation late that day, did not have clearance for the airspace, and was flying in violation of the airspace restriction, so imagine my surprise when they buzzed right through.

To date, we never did fully resolve who the operator if that helo was, and simply reported the incursion to local air traffic control for monitoring.

Please amend your report to be more factual, or remove it from your site. I appreciate your time and efforts on this topic, and credit you for creating a resource for the greater good of the pilot community, but facts tell a more useful story.”

During a late-day flight on the northern Sumner WA fires site.

6 minutes into a programmed mapping flight with drone deploy, a helicopter was heard approaching the flight position from the south. Once I turned around, the unmarked helo was approaching in a diagonal position flying along the powerlines with a camera or other sensor pointed out the side of the aircraft. I used the pause function in Drone Deploy and watched while the helo continued north then circled one of the towers and continued north. The position of the paused Mavic was only a few hundred feet from the likely flight path, at a higher altitude than the helo at the time (helo 150ft, Mavic 500ft).

Instead of leaving the unit to hover, and allow the helo to close in, I pushed the return to home option and watched the Mavic stats to see how quickly it was returning and at what level. The programmed return altitude was 450ft and the Mavic was returning at 33mph, and at an angle that I estimated would get too close to the helo flight path, so I switched to manual mode in drone deploy and used the left elevation control to force the Mavic into a downward angle to loose altitude continuing on the same return path with the forward stick toward the home location.

While bringing the Mavic downward and homeward, watching the stats on the controller, I was also focused on the continued movements of the helo while it appeared to be inspecting the towers, and moving northward into the programmed flight area.

On the Mavic return, it reached a low enough altitude, and was on an unfortunate course, to collide with the upper structure of a mud separating plant tank on the southern end of the site. The impact location was approximately 60ft above the ground and 218ft from the home location based on telemetry from the controller and data from the flight app.

I used that info to search the site, to conduct a 20-minute search for the bright orange Mavic but found no sign of it. I then asked one property owner and one employee to help search the upper structure if possible due to a locked access ladder, and they were happy to help. From there search, plus a short flight with another drone to aid the search, we concluded that the drone likely fell into the primary or secondary open-topped mud tanks, and would not be recoverable. 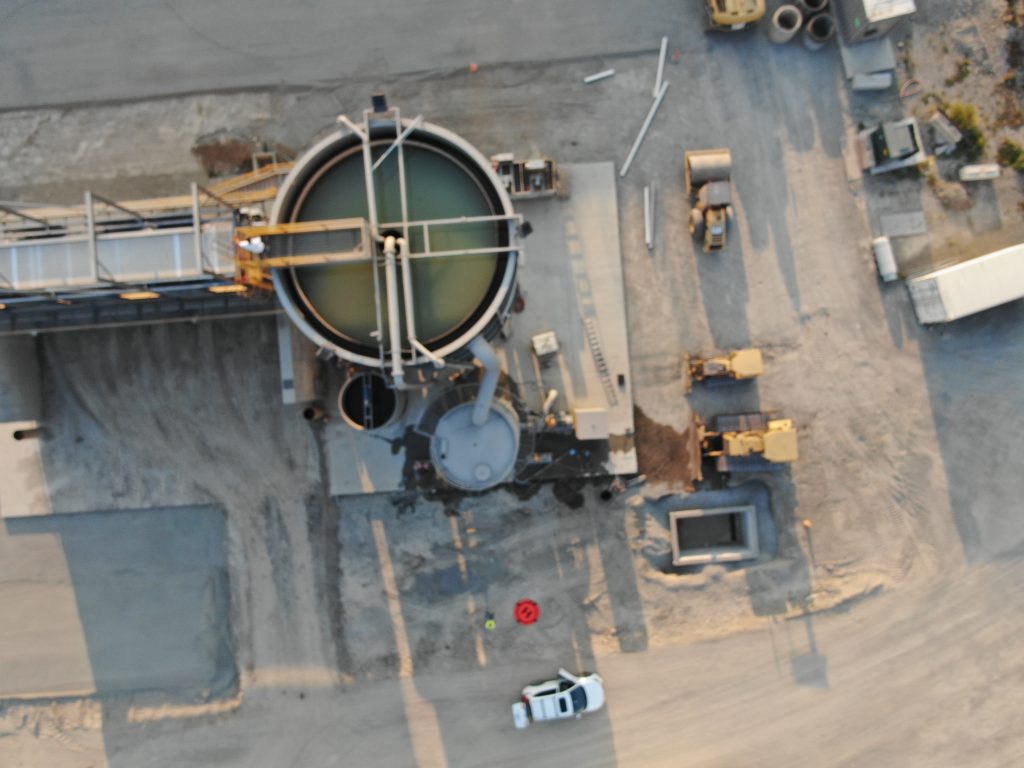 Controlled Airspace (fire TFR) incursion (without incident command contact) caused emergency drone avoidance response that prioritized manned helo safety over drone safety. A singularly tall obstruction was struck while on direct return to the home position. The pilot was visually focused on the helo movement and not specific drone return path obstacles. No people on site due to fire evacuations. An observer was not available at the time due to limited staffing.

First off, I would like to applaud the pilot that submitted this report. Every incident or accident is an opportunity for us all to learn. I’m going to point out some issues and suggestions but these are done only in an effort to help all pilots, not chastize this pilot.

Since there are so many issues with this flight I would recommend that all pilots that have a similar episode file an anonymous report with the Aviation Safety Reporting System to get some immunity from regulatory actions.

I am a big advocate of UAS pilots that operate in areas that helicopters may be more likely to operate in, to carry a VHF aviation radio transmitter.

I have a free class I created – Aviation Radio Communications for UAS Public Safety Pilots.

I can assure you as a public safety pilot, when myself, or any manned pilot, is flying at a low-altitude we get tunnel vision. The primary focus is what is ahead of the aircraft that we might collide with. We are not looking for drones. There is just no time. It is likely the helicopter pilot was fixated on the powerlines and flying a profile that accomplished the mission and would not have been expecting to see a drone flying in that area.

The pilot reported the RTH altitude was set to 450 feet and appears to state the Mavic was operating at 500 feet. As the FAA says, “The maximum allowable altitude is 400 feet above the ground, higher if your drone remains within 400 feet of a structure. Maximum speed is 100 mph (87 knots).”

Drones have to give way to all other operating aircraft, “Each small unmanned aircraft must yield the right of way to all aircraft, airborne vehicles, and launch and reentry vehicles.” – Source

Any UAS flight outside of the visual line of sight creates an imminent safety hazard when even operating below the maximum height of 400 feet. Helicopters can operate at any altitude and in the airplane I can fly as low as I feel is safe in a “sparsely populated area.” The limitation for me in the airplane is “the aircraft may not be operated closer than 500 feet to any person, vessel, vehicle, or structure.”

In the case of a search and rescue or natural disaster assessment, there have been times when I have been over water or “sparsely populated areas” that the situation required flight below 500 feet AGL.

Drones do not own the airspace below 400 feet. They have a right to operate in that space, as long as there are no airspace restrictions.

Even as a manned airplane pilot I have to always bee on the lookout for other aircraft in disaster areas.

Here is a picture of me passing within a few hundred feet of a helicopter traveling in the other direction. 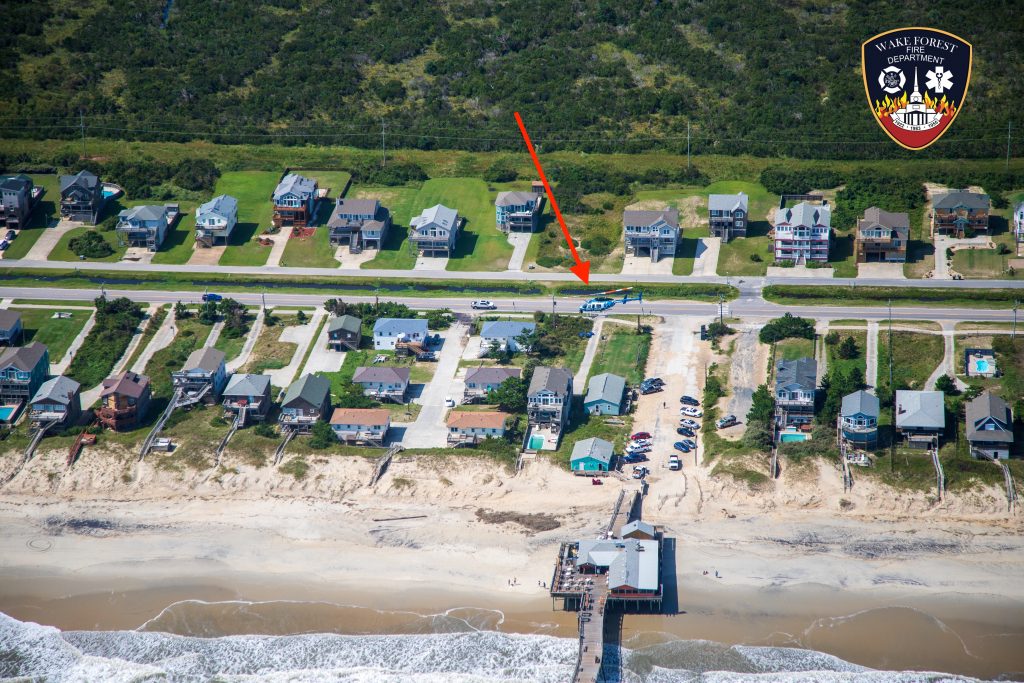 The helicopter is hard to spot because of all the ground clutter beneath it. Spotting a drone is darn near impossible. It is much easier to locate things above you when you are standing on the ground with the sky above. This is one of the issues the helicopter pilots talk about in the class.

The Mavic was operating near aircraft and FAR 107.37 deals with this issue. While the UAS pilot was attempting to move the Mavic out of the way, they seemed to overlook two other possible solutions that might have made the situation safer.

If you are operating in a fire TFR no flight is permitted without coordination.

Here is an example of a current wildfire TFR notice.

Drone flight may be permitted within a TFR but it must be coordinated with the authority responsible for the airspace. Every drone pilot should be looking up active TFRs before a flight. Keep in mind there are many reasons why TFRs exist that are not is disaster areas. A TFR may be issued for things like model rocketry, sporting event, VIP visit, etc. Do not assume a TFR does not exist in your area if there is not an ongoing natural disaster.

Using the UK DROPS Calculator we can see that at the estimated collision height of 60 feet and with an aircraft weight of 907 grams, the DROPS calculator states if the aircraft had fallen from that altitude and struck someone wearing a hard hat it could have been fatal.