I was on my third flight, starting with a battery at around 55-60% on a narrow roadway with 100-120 foot fir trees lining each side of the road. Needless to say, there was not a lot of room for error while taking off and landing. Take-off went as usual. At around 90 feet, the drift started, and my attempts to maneuver from the trees were unsuccessful. 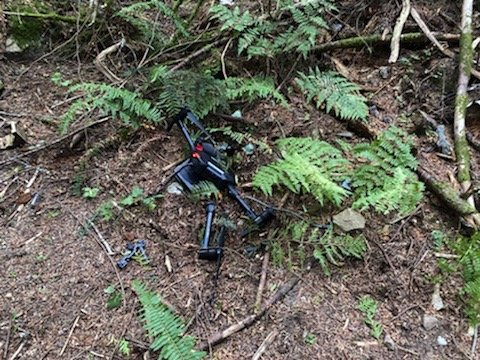 The pilot submitted the DAT file for review.

Here is what the data states.

Throughout the entire flight, the data point OSD.imuInitFailReason returns MonitorError for every entry.

OSD.imuInitFailReason returns GPSPositionNonMatch between 10.0 seconds into the flight until 10.8 seconds. The aircraft is being directed to climb during the error sequence. It does climb from 29.8 meters to 32.3 meters.

During the GPS Position Error the aircraft is receiving a signal from 7 U.S. based satellites and 6 Russian based GPS satellites on the GLONASS system.

At the time of what appears to be a collision with a tree, the aircraft controllers are neutral, 15 to 17 satellites are being received and the aircraft is drifting up and down by a couple of feet and reporting a speed of 1.2 MPH.

When the aircraft was powered up is reported a total of 8 satellites but had recorded a matching latitude and longitude between the IMU and GPS position with the 8.

osd_data:navHealth is at a 4 during the event. With 5 being the best.

The aircraft began it’s flight, after the assisted takeoff, with nav health of 4 and 10 satellites.

The last recorded vertical speed entry has the aircraft moving at 5.2 m/s or 11.2 MPH.

The controller is in Mode 2 or normal configuration in the U.S.

In DJI documentation Mode 2 is referred to as American mode, Mode 3 is Chinese mode and Mode 1 is Japanese controls.

The controller signal strength was almost entirely 100 through the flight.

osd_data:compassError is False through the flight.

The flight log appears to not record the point of impact so it is not possible to calculate the kinetic energy at impact. The aircraft and Z30 camera were reported as severely damaged.

However, given the aircraft weight of 3.8 kg, the Z-30 camera at 556 grams (4.356 kg) and the last recorded height of 108 feet. Using the DROPS calculator the outcome of someone struck by the falling drone is calculated to be “Fatality: Death resulting from an injury or trauma.” That is even with the person wearing a hard hat.

My opinion is it appears the pilot had selected P-GPS flight mode where the aircraft would maintain it’s flight position based on GPS position reporting.

A similar incident was documented in a UK Matrice 600 accident. The accident report noted, “The aircraft used a combination of GPS, inertial and magnetic heading (referred to by the manufacturer as ‘compass’) information to maintain a fixed position when hovering, automatically navigate and to RTH. If either the GPS or compass information is lost, the aircraft will revert to a manual flight mode referred to as attitude (ATTI). In ATTI mode, the aircraft will maintain its altitude and attitude using its internal barometric and inertial sensors, but its position is no longer stabilised by the GPS. This means that the aircraft will drift with the wind in ATTI mode.”

There does not appear to have been any strong visual warning to the pilot that the aircraft was operating in Atti mode instead of the selected P-GPS mode or that the selected mode and actual flight mode were different. Around the time of the accident, the logs show the aircraft had 15-17 satellites it was tracking but I do not see that the flight mode left GPS_Atti flight status.

If the pilot was unaware the aircraft was not flying is a GPS stabilized mode, as selected, the drifting of the aircraft, even with control inputs would have been more than could be mentally processed in a few seconds of flight before impact.

While my recommendation is typically to escape a confined space by gaining altitude rapidly, in this case at 14.0 and 15.4 seconds into the flight an “Upward Obstacle Detected” error message is recorded. The log ends 1.8 seconds later.

The accident appears to have a fatal component since the DROPS calculator returns a fatality outcome if a person in a hard hat had been struck by the falling drone.

This report is simply my opinion after review of the flight logs and data.

There are two primary training opportunities from this accident.

I’m not pointing fingers at the pilot here. I’ve done the same thing of taking off in a restricted area. It is now not within my personal minimums to do that anymore after some lucky outcomes.

To help you picture what my minimum is, my landing zone must be larger than a neighborhood culdesac with no overhanging trees. I also have to verify the aircraft is climbing straight up in the middle of the culdesac to a height at least 50 feet above the tallest tree nearby. The easiest way to confirm this is to come to a hover, make sure your camera is level, and then do a 360-degree turn to verify the top of the trees is below the aircraft.

If the aircraft appears to not hold its vertical axis as you climb up. Bring it back and land.

We all need to regularly train immediately going into Atti mode and flying the aircraft manually whenever there is any concern the aircraft is not behaving as expected. My default escape route is up, but in this case, the aircraft had drifted under an overhead obstacle.

My suggestion is for one pilot to switch the controller of another into Atti mode without warning and the PIC would then evaluate the area above the aircraft and begin an immediate climb. The only time this is not an appropriate escape route would be if you are at battery minimums already.

If you are up and away from obstacles you can then what we do in the airplane, plan a stable approach for a safe landing.