This is the 2nd time this has happened within 2 weeks – the first was on an M210 and this latest one on an M2ED both with Crystal Sky.

Take-off and early flight were both normal. On the M2ED, the first sign of potential trouble was when the battery percentage froze at 81%. On the M210, the radar triangle moved erratically, as though it was updating every few seconds instead of close to real-time. Then the battery percentage froze at 73%. In both cases, the battery % remained frozen until after the aircraft landed and the props stopped. Then the “correct” % showed up (62% for the M2E and 29% for the M210).

The battery voltage snapshot of the M2ED from Airdata is attached. 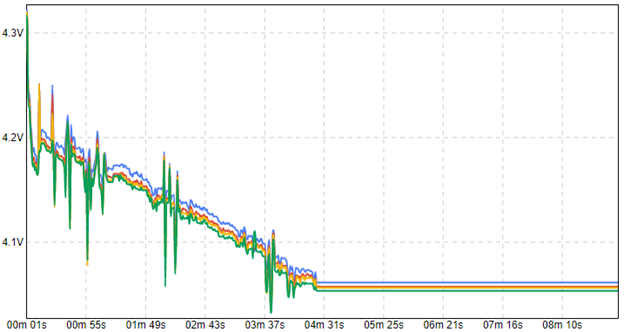 So, two different aircraft – looked like a CPU or memory resource conflict but I was expecting the problem to be in CS. But the Airdata report suggests the problem may be in the aircraft resource that is capturing the data.

This issue has been shared on various forums (Mavic pilots, DJI), and submitted to [email protected], but no response so far.