Update September 7, 2020: A Matrice 210 accident was just reported to me that if people had been sitting in those stands, the drone was traveling at enough of speed and with its weight that an impact would have been fatal. You can see the accident here.

Safety Alert – Given the accident reports and data I have seen so far, I would urge all Matrice 200 and Matrice 210 pilots to not fly over any people and do not fly beyond a visual range where both the aircraft and ground below can be visually observed by the pilot or Visual Observer.

These concerns do not involve previous battery firmware issues.

The pilot needs to determine at all times that if the aircraft develops a loss of thrust, control, or power that the vertical plunge and/or uncontrolled impact will not damage property or injure people below the aircraft.

It is not unreasonable for pilots or agencies to ground their aircraft over this safety concern. You can find my logic for this safety alert statement, below.

This is the first Safety Alert that I’m publishing. This alert is an outgrowth of my near accident I experienced while flying the DJI Matrice 210 In April of 2020. After my unexpected autoland issue which you can see in my report here. My experience led to this article where I began to express concern over the lack of data for pilots who are responsible for making safe flight decisions.

What I found was a shocking lack of published accident data in the United States, nearly none. Accident data that was previously published on UAS accidents in the US, ceased being distributed in 2014.

As of now, Australia and the United Kingdom provide the most data. The UK data comes from investigations into accidents and the Australia data appears to come from pilot reported incidents.

As a result, I created ReportDroneAccident.com to enter the data I found and to solicit reports from pilots. I encourage all drone pilots to enter any error issues they’ve faced as incidents and crashes as accidents.

From the data I have been able to review so far I have entered 141 accident reports for DJI aircraft, of which 37 did not identify the model. The breakdown of models identified can be seen in the chart below.

If we lump DJI accident data into the series of aircraft the Matrice series, of 200 and 210 aircraft, comprises almost 40% of accidents.

Yet, given the fact less expensive drone models must logically sell in higher numbers, the Matrice series of aircraft accidents appears to comprise a much higher risk than other models. The next model to watch is the Phantom 4 and Phantom 4 Pro.

The UK Air Accidents Investigation Branch (AAIB) appears to have noticed an unusual number of DJI Matrice 200 series accidents as well out of all UAS accidents investigated. 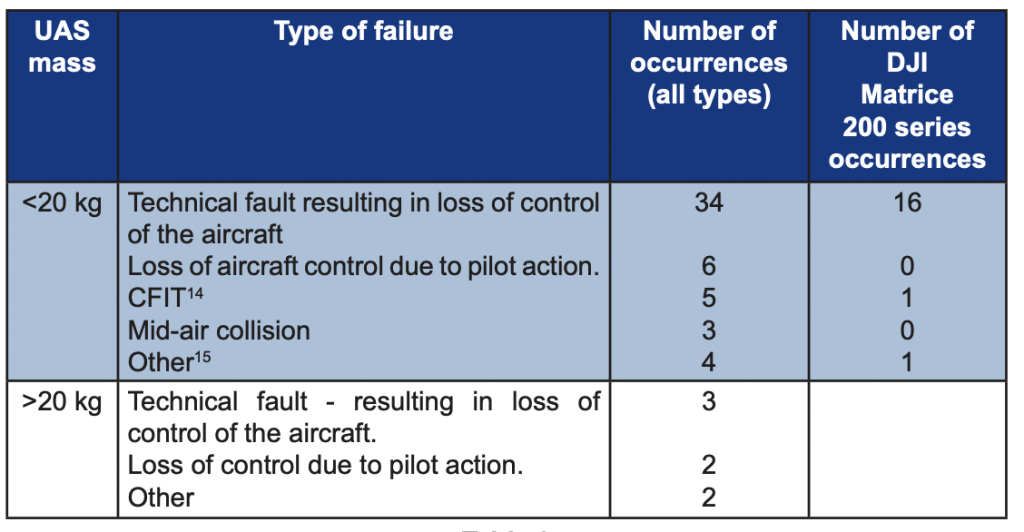 The DJI battery firmware issues in the past were to blame for Matrice aircraft losses but as the AAIB identified, other problems exist.

In fact, in this report, DJI provided data to the AAIB showing that in almost 40 percent of accidents DJI was unable to determine the cause. This is “manufacturer findings on Matrice 200 series failures.” If DJI can’t identify why this series of aircraft is crashing then you need to consider if they are safe to fly.

The AAIB report says, “The manufacturer stated that the probable cause was identified by analysing the UAS and/or its recorded data. Where neither data nor the aircraft was available for evaluation, or where the results were inconclusive, ‘educated guesses’ were made as to the possible cause of the failure.”

The AAIB, in this report, said, “Failures of the Matrice 200 series aircraft resulted in a loss of power and control, with the aircraft typically falling vertically to the ground. This poses a risk of injury to people on the ground which is not mitigated by the current UK regulations or the published guidance material.”

In my incident, the Matrice 210 entered an autoland situation with the camera gimbal frozen with 55% of battery power. In this accident it was reported, “The recorded data from the aircraft indicated that the batteries were functioning normally and there was 22.8 V and 65% charge remaining on both batteries when it had hit the building. The manufacturer reviewed the data and confirmed that the loss of power which led to a loss of lift and control was caused by failure of the No 4 (right front) motor electronic speed controller.”

But I also found a surprising revelation that I don’t think I’d heard of before. This report reveled, “Batteries in storage, however, can generate an infinitesimal voltage which the battery capacity algorithm will detect and interpret as an apparent ‘ghost’ current. Over time, this can result in the battery SOC increasing even though the actual capacity has not changed. To stop this happening, an Open-Circuit Voltage (OCV) correction in the algorithm is used to compensate for any ‘ghost’ currents detected.

The investigation found, however, that for some batteries the ‘ghost’ current was higher than expected but within the design variance of the battery. When these batteries were subsequently subject to long-term storage (such as new batteries shipped and then stored by a retailer), the capacity algorithm slowly summed up the ‘ghost’ current as a charge, resulting in the generation of the false high SOC value. When the batteries were then recharged for use, the charging would have stopped once the SOC value reached 100%, but essentially before the batteries had reached their maximum charge capacity.”

That can be an I now believe I have personally faced as older TB50 and TB55 batteries do not seem to have the same flight time as newer batteries do. At least that is my impression.

In my article I presented that here in the United States, according to the Federal Aviation Regulations (FARs), all drone pilots and/or their public safety agencies bear personal liability for making sure their aircraft is prepared for safe operation but a lack of data makes it very difficult, if not impossible, for pilots to make informed decisions.

The UK AAIB had found, “New operators with little, or no, previous aviation experience are still developing procedures whilst operating small UAS which do not require certification due to their relatively low weight. The combination presents a challenge which operators, manufacturers and regulators will continually need to monitor and develop to ensure the safe operation of this expanding area of aviation. – Source

Given the facts I’ve reviewed, I have made the decision that for me personally the risk of flying the Matrice 210 is unreasonable until DJI is better able to resolve known and unknown issues or to be more transparent about the type, risk and rate of incidents pilots experience. Here are the Matrice 200 reports and Matrice 210 reports I’ve reviewed in coming to this conclusion.

In the interest of transparency, here is the logic I considered to reach my safety conclusion.