During a battery swap on a mapping mission, both TB55s swelled to the point they are not usable anymore. After the drone landed and I went to remove the batteries they were difficult to remove. Upon removal, one was swelled and broke the battery housing and the other one was deformed. The batteries were not swollen before the flight and had been charged the night before in a Colorado Charger rapid charger.

The batteries are 2 years old and have been charged around 25 times. They still had 97% battery life according to AirData. Besides their age maybe the charger could have affected them. I received no battery issue indications during the flight. I was very fortunate it did not fall out of the sky. 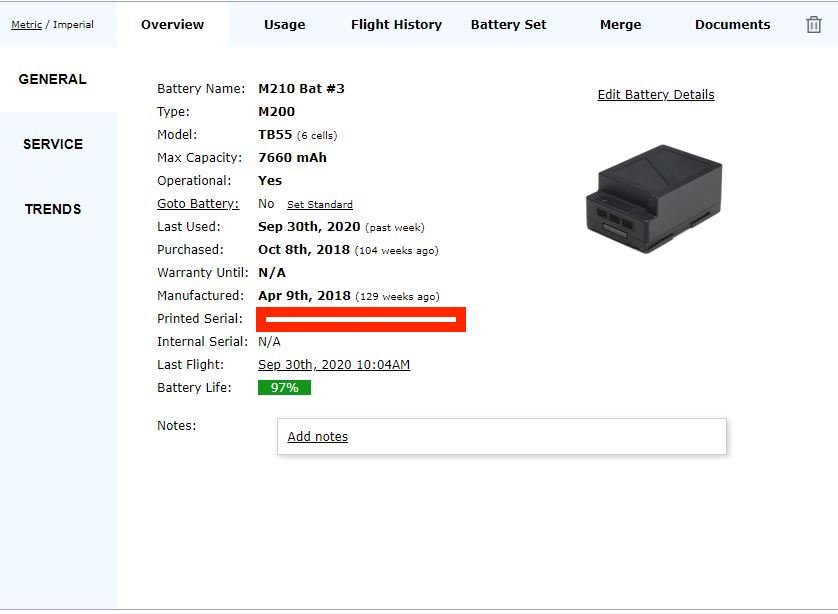 It is interesting to note that while the battery data shows the batteries were manufactured on April 9, 2018, the internal data in the flight log says the battery product date is actually February 1, 2018, and December 17, 2017.

There are no warning messages generated in the flight log file.

No battery temperature data was recorded.

The outside air temperature at the time of the flight was 68.3F with a 7.3MPH wind.

There is nothing I can find in the flight logs that would indicate the pilot had any awareness of the decomposition of the batteries in flight. If the batteries had failed it is entirely plausible that the drone would have plummeted to the ground.

I experienced a similar issue with TB55 batteries swelling and DJI advised me that batteries need to be replaced on an annual basis. The cost of doing this for our department was going to be $6,000 or more a year which is entirely unreasonable.

But the issue gets worse. Keep reading.

Some say the battery swelling issue is caused by the conditions in which the batteries are stored and influenced by heat and humidity.

I can state that the eight TB50 batteries and eight TB 55 batteries all were exposed to the same conditions in my use. However, only the TB55 batteries became swollen and had to be discarded.

Batteries that swell are more at risk of exploding and should be disposed of immediately and properly. One theory here is that the swelling could have been caused by an overcharging of the battery with the rapid charger but that is only a theory and can’t be substantiated by recorded or measured facts.

To help research this incident I went and read the Matrice 200 Series Battery Guidelines.

I doubt many of us have actually read this document because if we had we might have been surprised by the following statements made in the document.

It would seem impossible or make the use of the aircraft impractical if batteries can’t be transported at more than a 30% charge and must be attended during the charge before use in a narrow temperature range.

The bottom line here is the batteries are potentially explosive, flammable, and any issue with a battery that leads to an unfortunate outcome is going to probably rest with the pilot and or agency for not complying with the battery guidelines.

I would forecast DJI would disavow any responsibility for the batteries used during this reported incident.