Mission was to inspect a guy wired tower. About 10 minutes or so into it, the drone was moving on it’s own and I thought it was wind or lost GPS signal. I repositioned and focused on the camera while maintaining a hover.

Then upward obstacle ( guy wire ) was detected and then it hit the wire, hung on the guy wire, slid down it for 10-20 feet before a death spiral to the ground. It totally destroyed the aircraft. 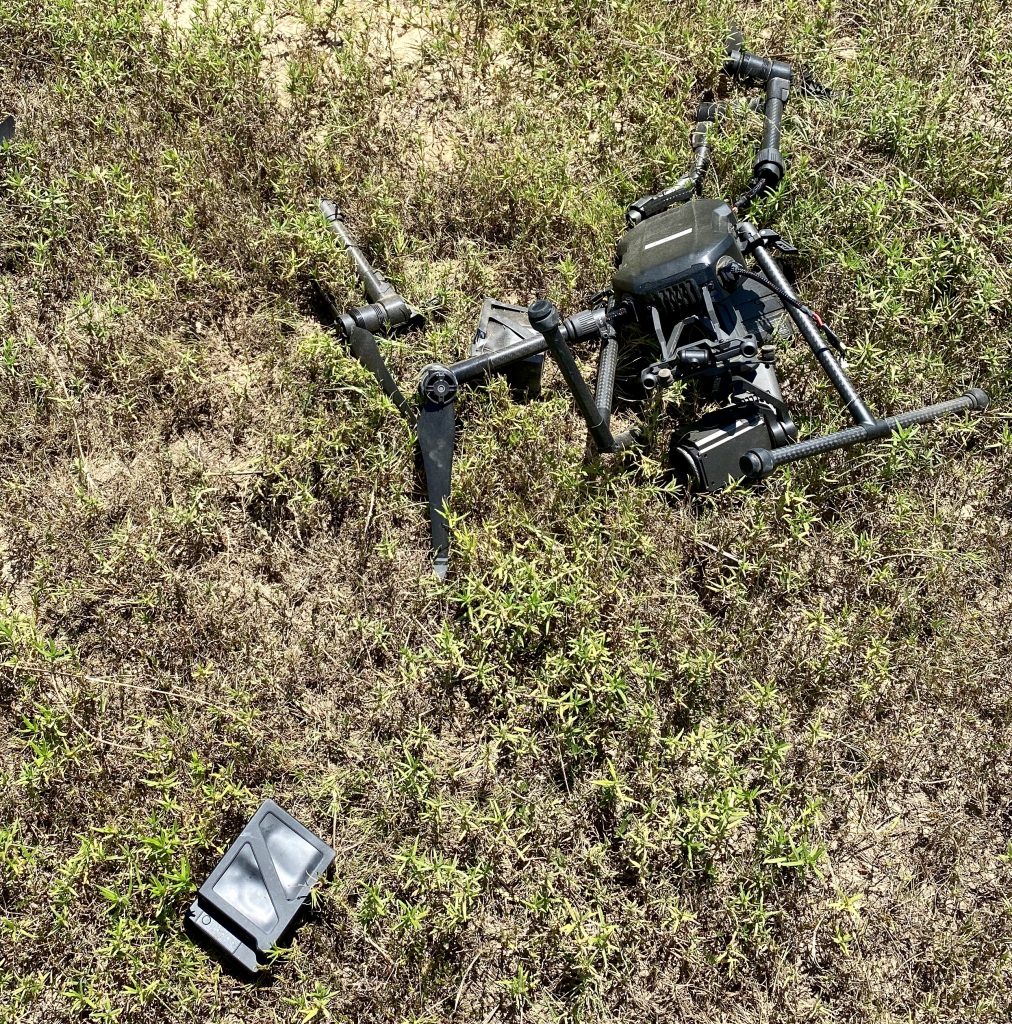 I had this type of issue before and it was determined to be a bad controller gimbal. The drone just ran away on its own, I managed to get it back with only a cracked landing gear. I sent the drone off to an authorized DJI facility for service/ inspection. They told me the controller can’t be fixed. I bought another controller ( used ) from them and used the controller that was linked up to the drone as delivered from them. So my drone came back with three identical controllers, I had no idea which was the bad one, I assume the one linked up that they flight tested is the good one. 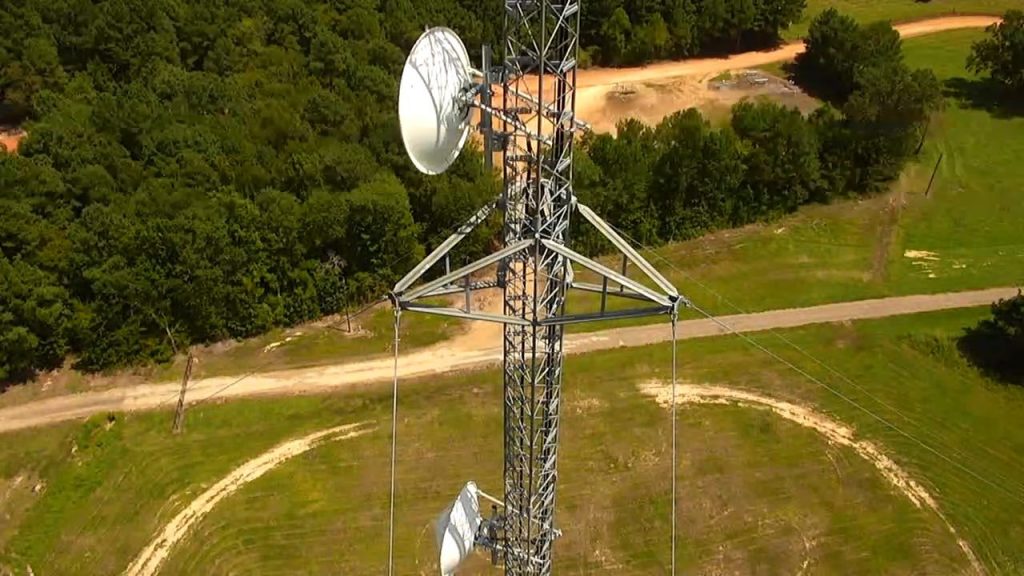 If your controller asks you to calibrate it randomly. Take that controller out of service and get it checked out.

I totaled this drone within a few flights from getting serviced and inspected for the very issue that it was sent out for.

From the moments prior to impact with the guy wire around the tower the aircraft appears to have been operating as you would expect. GPS health was excellent and the number of satellites was very high. At the time of what I identify as an impact with the wire the aircraft states, it had 16 satellites and was in P-GPS flight with very good GPS accuracy.

In my opinion, the moment of impact is shown at point A in the flight log.

The purple line at point B is the throttle and the red curving line above that is altitude. It appears the pilot gave the aircraft a throttle up command and the height increased. Just prior to point A an input is given that is identified at point C as RC:aileron. The input appears to command a slide to the left. The slide ends at point A.

Of course, there is no way to tell from the log files if something else was responsible for the throttle movement other than the pilot.

After substantial inspection of the data files for this flight, I did find some period of lateral movement of the aircraft without any throttle or other inputs. The largest horizontal movement I found was .3 meters/second (about a foot) but typically would be in the .1 to .2 m/s range.

According to the weather on the day of the accident the wind was 7.2 MPH.

Just prior to the impact with the wire the pilot received an upward obstacle warning and moments later GPS_POSITION_NONMATCH errors are logged during the time it appears to be in contact with the guy wire and losing altitude.

According to the online DROPS calculator, given the weight of the UAS and the last recorded altitude, an impact with a person on the ground wearing a hard hat could have been fatal.

The last recorded speed of the aircraft in the log file in the descent was 49.6 MPH. A skull can be fractured with an impact of 200 Joules. This aircraft appears to have hit the ground with 2,118 Joules.

In evaluating these accidents I have the luxury of looking at the situation from hindsight. Accidents tend to evolve very slowly and then things accelerate right before the accident.

Here are some issues I think this particular accident brings out that we can all focus on.

In the cockpit the factors surrounding SA, as we call it, are a matter of life or death. As the Aviation Safety Magazine said, “SA as “the accurate perception and understanding of all the factors and conditions within the four fundamental risk elements (pilot, aircraft, environment, and type of operation) that affect safety before, during, and after the flight.” That’s all-encompassing, but lacks detail and requires pilots to intrinsically understand it. It has too many syllables. For example, how accurate must a pilot’s perception or understanding of “all the factors and conditions” be?”

In the manned aircraft world, we talk about CFIT (Controlled Flight Into Terrain), think of the Kobe Bryant helicopter accident.

In the drone world, a guy wire might as well be a mountain. This flight into the wire is pretty close to drone CFIT.

Aviation Safety Magazine said, “A simple way to explain SA is to consider the classic controlled-flight into terrain (CFIT) accident in which a perfectly good airplane is flown into a mountain. That mountain didn’t just pop up to the pilot’s cruising altitude overnight. It’s been there for millennia, it’s been charted and the area’s minimum en route altitudes consider it. How could the accident pilot not know it was there? The quick answer is the pilot probably did know the mountain existed, but lost track of his own position.”

With the benefit of hindsight, our pilot might have been able to reduce his chances of a collision by not operating so close to the tower or wires. This sometimes means you have to walk with your controller to a new position where you have a better view of the obstacles nearby.

At the moment of impact the aircraft is reported to have been at 82.8 meters (271 feet) and if the pilot and controllers were some distance away near where the Home point is indicated, the angle, difficulty in seeing the wires, and angle from the pilot to the aircraft, could have played a factor.

Another issue that may have had a role in this accident could have been complacency. This is not a criticism about this individual pilot but it can be a factor in many incidents. Just because you have flown a certain mission profile 100 times, that does not mean you should relax your guard because it was without incident on those 100 flights.

Complacency is not an issue for the novice pilot but also experienced test pilots as well. As an example, here is a part of a test flight debrief video that reinforces this point.

In talking to the pilot they had operated around towers in the past and I can see how I could be lulled into a false sense of security having put a number of successful drone tower flights in my logbook.

In the airplane, when I’m doing difficult public safety flights, with limited margins of error, it is still easy to make a bad move and get yourself into trouble. For example, I was looking at a target on the ground and making a steep 60 degree turn around the target. Before I knew it I was losing altitude. I corrected it after losing 200 feet but still, it could have turned out to be a deadly mistake since there wasn’t that much altitude to play with.

We should all fly a difficult flight as if it is the first time we have done it.

In my case, now when I have to fly low altitude steep turns in the airplane I run through a checklist on the basic steps I need to think about because there is a limited margin for error.

The pilot stated that earlier in this flight the “the drone was moving on it’s own” and that should have been a sign that the drone should have been immediately landed where it was and not returned to service until an authorized repair center had verified the aircraft was safe to fly. Alternatively, the pilot if the final authority of the safe operation of the aircraft.

If the aircraft had behaved with the uncommanded movement issue on any flight prior to this flight, it should not have been allowed to fly. But since it demonstrated positioning issues during the flight, FAR 107.15(b) looks like it directly applies.

ADM is tough stuff. It is very hard to constantly make the right decisions during a flight but this is why all pilots need pre-flight clarity on what they are going to do in a situation so the response is automatic. If the pre-flight policy was to land the aircraft and take it out of service if there is any deviation from accurate control of the drone, this accident would not have happened.

In the airplane, each flight has a verbal briefing on what will happen if we lose the engine on takeoff. By running through the process and saying it out loud, if the engine were to quit I know exactly what I’m going to do.

For example, “In the case of an engine loss on departure on Runway 23 L or R, if I can’t put the airplane back down on the runway, I’m going for either of the two lakes to avoid the busy highways as my intended Final Termination Point (FTP). If I can’t make the lake off 23L I’ll take it into the trees if there is any possibility of a highway landing that might cause injury to others.”

This way I don’t need to decide what to do in that emergency situation. I’ve already decided what I’m going to do, verbalized it, and all I have to do is execute the plan if the situation arises. 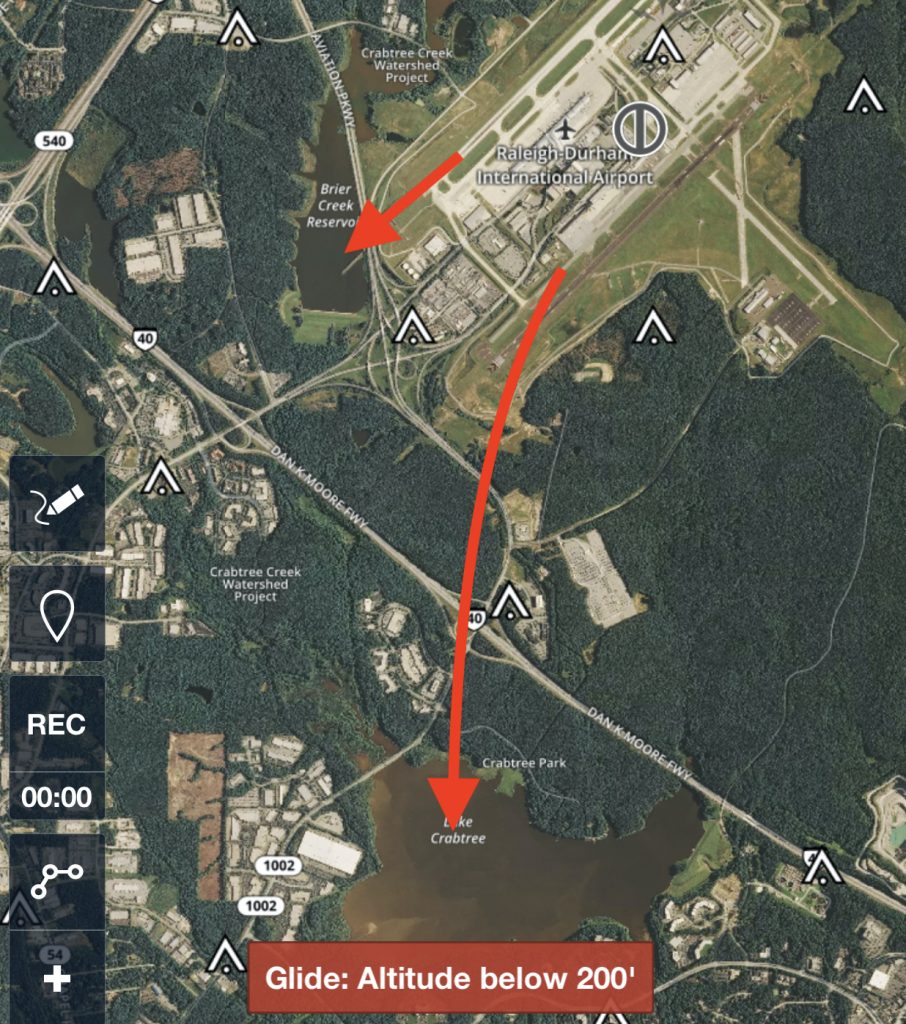 It would be helpful for all drone pilots to have a similar procedure and verbally say what they intend to do.

For example: “This is our pre-flight briefing. In the case of any deviation or loss of control of the drone, my intention is to either land it immediately if safe to do so or take it into a Final Termination Point that will have the least chance of causing others to be injured. If I experience any drifting of the drone in flight and it is still controllable, I will bring the drone back immediately for a safe landing and ground the aircraft until the cause of the uncommanded flight can be determined and the aircraft can be returned for safe operation. In the event of a flyaway situation, I will crash the drone into a safe Final Termination Point rather than let it depart my area of operation.”

I believe the pilot when they say they had previous flights where the Matrice 200 started drifting and appeared to not hold a stable GPS location.

In fact, the brief periods of lateral movement without inputs resulted in drifting up to a foot.

However, while there was a slight amount of drift just prior to the accident it appears the primary cause of the accident was the result of maneuvering the aircraft to a position that was in close proximity to the guy wire that it impacted with. Since the aircraft was carrying a Z30 zoom camera it might have been able to standoff at a distance.

Just immediately prior to the moment, I identified as an impact with the wire it appears the aircraft moves laterally a little over six inches with no control input.